I Hope I Get Your Voicemail

Oh good, I am rounding the curve, out of the "dead zone". I was on my way home from work and thought I would call my friend Rosi(E) Beachy(E). Some time ago, I had started to place an E at the end of her first name. I guess subconsciously I thought she had a great anchor woman name. "And now back to the newsroom, with Rosi(eee) Beachy(eee). Rosi(eee), what's the update on our late breaking news flash?" This is a friend that gave me a birthday that reads, "Happy Birthday to someone who's just the right amount of weirdness for me." I always tell my kids that when somebody calls you weird take it as a compliment, even when that wasn't the intention. Ya saying that Rosi gets to see and hear my "weird" from time to time is an understatement.

She had moved to the east coast a while back, taking a sales position with our employer. With her new position she was spending more time traveling in her car, a car equipped with XM radio tuned into "Oprah Radio". We'd give each other our best Maya Angelou and Dr. Robin voiced advise during our phone conversations. The chances that I would catch her in her car was high.

As far as transparency goes, I'm pretty see through. You know, the kind of revealing that is mysterious. I could use a negligee analogy, but that would be weird. Yah I know, go with it. There's a time to reveal just enough and a time to reveal it all. Listen and you will know when and with whom to reveal.

"Happy Birthday to someone who's just the right amount of weirdness for me." Rosi brings out a side in me that I love, but many times question. Why question it? That's weird in an irrational kind of way. As I started to discover my B*a*g I had to make a commitment to being a better friend, which required me to share me with my friends. There were friends that embraced "me" even when it seemed a bit outrageous. There were friends that would just knod and smile. They didn't really get it and that's fine too. Rosi gave me that birthday card at the beginning of my re-birthing process. She probably doesn't even know the magnitude of her gift. She said to me that I was "ok".

Rounding the corner out of the dead zone. I better call Rosi before I forget. 70's on 7 was blasting from the radio. "Gee I hope I get her voicemail." It's 6 o'clock her time and she's probably enjoying diner with her family. It's important to have family time and not answer the phone. Glen Campbell is blasting....

The next day on the way to her next sales calls, Rosi gets my voicemail. The Dancing B*a*g Lady had left her another weird voicemail. It put a smile on her face and spring in her step. Ever time I hear that song I think of Rosi and am inclined to leave her a musical voicemail.

Pave the streets of your success with friends who accept and embrace YOU. There will be less compromising on the roads to your horizons. I LOVE YOU Rosi(eee) Beachy(eee). You're one BIG rhinestone in my hat. 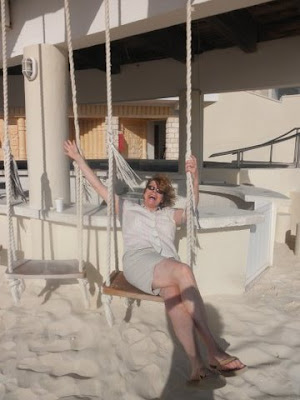 I share the same views. Liked your blog very much.

Interesting text. You have a nice blog. Keep it up!