Pass the Buck ~ What the Cluck?

You've heard the expression, Pass the Buck, right? I mean if somebody wanted to pass me an actual buck, hey that would be cool. A few thousand would be really nice. On the contrary, let's take, The Buck Stops Here! Its the kind of statement Presidents and people in a position of power make. I've had the pleasure of knowing a handful of leaders who didn't need to make the statement. Their actions spoke louder than those words ever could.


Well, of course I'm not talking about actual bucks. I'm talking about passing along blame, waste, complacency and responsibility. "I didn't say it was your fault. I said I was going to blame you." I hear my son say to me, "You made me mad, that's why I yelled," Ever heard, "So and so pissed me off." No actually, you just pissed on yourself. Can't you see that? I have to confess that I've dribbled on myself more than once, figuartively and literally. 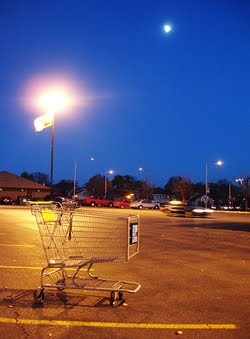 Let's take the seemingly harmless act of not putting your shopping cart into the tidy chart coral at the local grocery store parking lot. I know this annoys many people, including my husband. I have also become less tolerant of what just seems like laziness.

When I see a lonely cart stranded, I see a person who doesn't think much about themselves. That makes me sad. I wonder if Wal-Mart charts the cost to pay employees to chase down stranded carts. Here's a quick calculation. There are 3700 Wal-Marts nationwide. If each store had 5 carts per day and it took 2 minutes to retrieve each one and that employee made $7 per hour that costs Wal-Mart $1.5 million dollors annually. Hey pass me those bucks any day.

So if you abandon carts we forgive you. It feels good to place your cart neatly into the coral. Its not about being self righteous. Its about feeling good about doing your part. Simple, right? While you're at, let's think about using those reusable shopping bags. 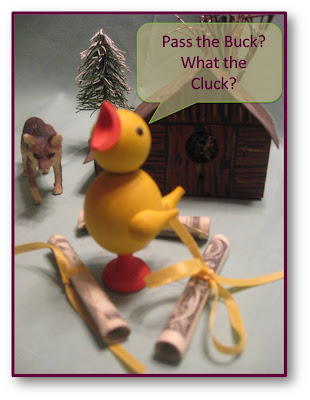 Now onto more serious matters. I follow the Darkness to Light blog. Darkness2Light is the world's leading non-profit working to prevent child sexual abuse. With over 1,800 trained educational instructors in eleven countries, and an award winning media campaign, they're doing their utmost to make the world a safer place for children. Their blog gives us the ability to show you what they're doing on a daily basis to end child sexual abuse.

Recently they posted a calculator that estimated the cost of not preventing childhood sexual abuse.

Being complacent about serious issues that expose vulnerable victims to predators causes one to pause and sometimes act. Most of the time all it takes is gaining some knowledge to make an impact. Education is an emphasis of Darkness to Light.


Within your circle of influence, where could the buck stop with you? And within the realm of your God given talents, what could you contribute and find joy at the same time? So the next time you have been passed a "travel weary buck" for which you have the influence, time and talent to stop, do yourself a big favor. STOP IT! The empowerment will pay you an infinite currency. Heck, you just may be saving major bucks and sweet little clucks. Start small and work your way up from there. You have something great and special to give.
Posted by Dancing B*a*g Lady at 8:52 PM